DISCO MANIA will turn Airlie Beach Hotel into a mind blowing recreation of the infamous Studio 54 discotheque and packs the dance floor from the very first note of Disco Inferno to the very last bass groove of the Village People 10 minute finale. Like, wow man – This show is DYN-O-MITE!!!!

You simply cannot afford to miss out on this crazy gig that pays tribute to a supreme style with an irresistible beat that started a worldwide phenomenon of the greatest era of music ever to emerge, DISCO!!! COOL CITY!!! Who can forget this dazzling decade of suspended disco balls, flashy dance floors, psychedelic flares, towering platforms, tight skivvies, flashy bling, massive afro’s, and those very groovy seventies dance moves? DISCO MANIA delivers all of this with stunning 70’s costumes direct from the USA!! WICKED!!!

it’s time to shake your booty like never before as DISCO MANIA takes it to the max with over 3 hours of non-stop dance hits. DISCO MANIA will BRING DA FUNK to Airlie Beach like no other!!! You’ll feel as if you’re actually back in the 70’s! RIGHT ON!!! Catch you on the flipside at a show real soon. GROOVY MAN… 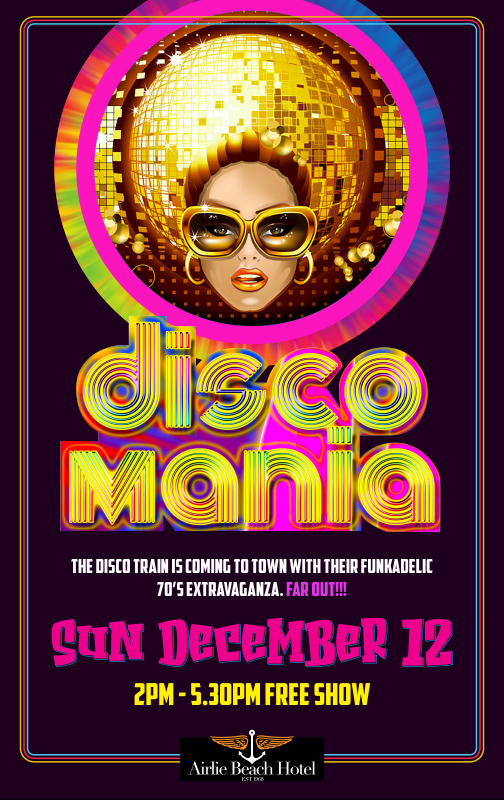