The boys of Gee’d Up are an act like no other; the vocal versatility of Khan, Steve and Joel tied in with their ability to cater to any crowd with their show-stopping dance moves is guaranteed to get everyone up and about and dancing. Hailing from the Gold Coast Gee’d Up are a regular feature at venues like Eat Street and Miami Marketta and have toured both nationally and internationally.

Gee’d Up are known by their polished three piece harmonies; the blend of their unique vocal styles transcends them into a fusion of soul, funk, edge and class. These boys know how to hold a stage.

Influenced by all genres of music and their New Zealand culture, there is nothing that the boys of Gee’d Up can’t cater for with their high energy, comedic and show stopping performance.

Every show is new and unique with a mix of the old with the new to create a show that will leave everyone wanting more.

From laid back music to filling the dance floor, this trio delivers it all.

Gee’d Up will be performing 2 very special shows including an R&B DANCE PARTY on Saturday and 80’s MIXTAPE on Sunday.

FREE Shows from 2pm each day! 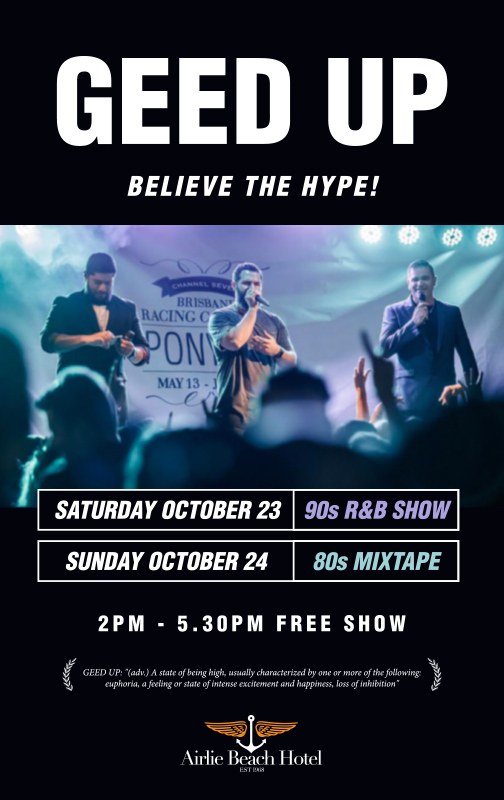