When it comes to performing the music and having the look of Sir Elton John, there are few that embody the presence and uncanny likeness quite like Greg Andrew. He owns the stage, channels the music, and has audiences believing it could really be the man himself! With his virtuosic piano playing, combined with his vocal timbre, it is no surprise that Greg is internationally recognised as one of the best Elton John tribute artists in the world and we are lucky to have him
perform a very special show for Airlie Beach.

The Elton John Experience is known for paying homage to the great music of Sir Elton John and Bernie Taupin. They have performed a hugely successful run of shows, both in Australia and overseas with performances in over 30 countries and to a collective audience of over 500 000 people.

The Elton John Experience will feature hit after hit from Elton’s back catalogue. With tracks such as I’m Still Standing, Saturday Nights Alright For Fightin’, Candle In The Wind, Daniel, Honky Cat, Don’t Let The Sun Go Down On Me and Crocodile Rock to name a few, it will be a spectacular evening from start to finish. Greg Andrew and the Elton John Experience band look forward to exchanging that love and energy of Sir Elton John with audiences. “This show and these songs will give you the ultimate Elton John Experience,” says Greg.

Make sure you book now and don’t miss out 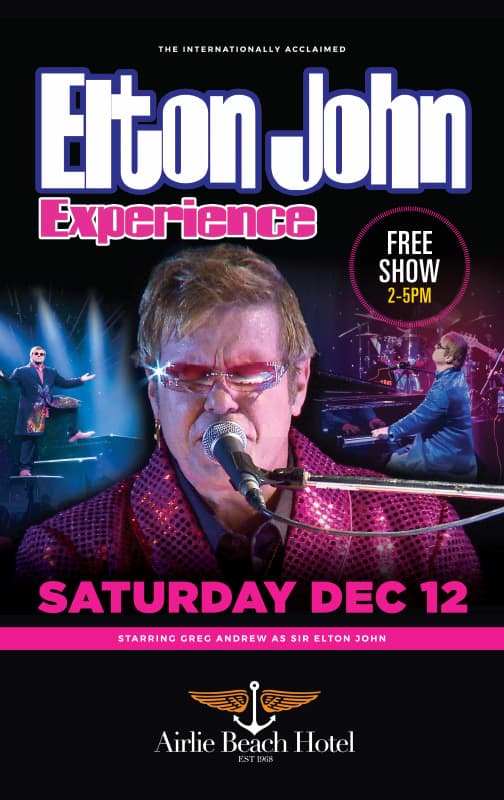