Introducing, The U2 Show ‘Achtung Baby’ – Australia’s ONLY internationally touring tribute to iconic rock band, U2.

The U2 Show Achtung Baby consists of four dedicated U2 fans – Michael Cavallaro (Bono), Peter Kalamaras (The Edge), David Attard (Adam Clayton) and Craig Jupp (Larry Mullen Jr.) – and together have performed U2’s timeless classics to tens of thousands of U2 fans in Australia, the Asia Pacific region, the South Pacific and New Zealand.

The boys (also known as U2AB – #U2AB) have even made numerous performances on Triple M radio, and Channel 9’s A Current Affair (who described them as “dead ringers to U2”)!

Such reviews exist because The U2 Show Achtung Baby give extreme attention to detail and reproduce each nuance of a U2 concert, thus re-creating the U2 “Experience”.

Their Greatest Hits shows are dominated by classic U2 songs. Their Hits And Rarities Show are a chance to perform a set of fan favorite “B sides” and rarities. Their Album Shows (a concept in which U2AB were one of the first to successfully bring to fruition) are a chance to recreate iconic albums such as Achtung Baby, The Joshua Tree and Rattle And Hum, song for song. Rarities and Album shows are usually followed by a set of greatest hits.

All shows exhibit the costumes, highlights and showmanship of Bono, The Edge, Adam Clayton and Larry Mullen Jr. – as well as the visual animations and footage that have featured in legendary U2 concerts.

Just like their fans have come to expect, each show features note for note renditions of U2’s classic songs.

The U2 Show Achtung Baby are the ONLY Australian U2 Tribute show that have performed and SOLD OUT live performances of The Joshua Tree, Rattle And Hum AND Achtung Baby.

Catch them live for one FREE show only at Airlie Beach Hotel Sunday September 12. 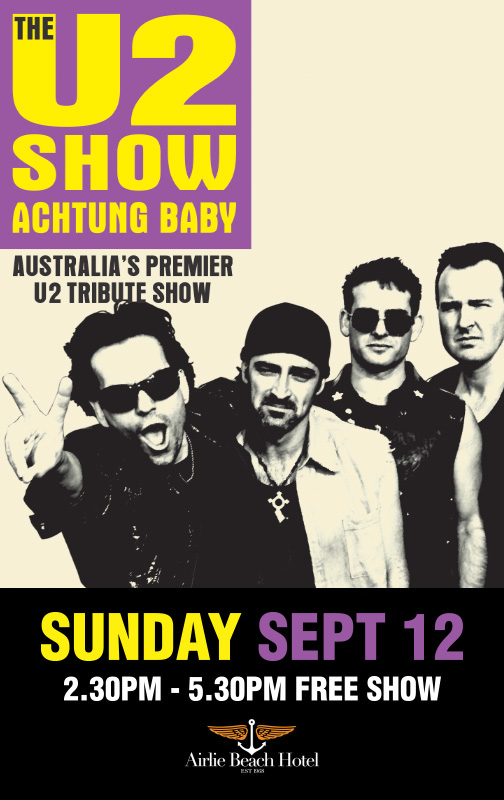